HERE’S THE DEAL: I HAVE 12 ORIGINAL PIECES THAT ARE GATHERING DUST AND MUST GO! Our Savior Lutheran Church, Grand Rapids, Mich., has an Organ Fund that needs filling. You have an itch to own an original Riojas at a drastically-reduced price. This is that opportunity.

The funds I receive on sales of each piece, minus shipping/handling* charges, will be given to the Organ Fund. Apart from purchasing anything, you may also give directly to the Organ Fund by emailing any of the following folks: Christina Roberts: cjbirdsong@gmail.com; Rev. Jeremy Swem: jswem@oursavior-gr.org; or Rev. David Fleming: pastor@oursavior-gr.org.

To purchase a piece, and for more information on each, please e-mail me BEGINNING FRIDAY, NOV. 29, 2019 at edriojasartist@gmail.com.

*NOTE: 4-Day Special price does not include shipping, handling, insurance, and extra duties, etc., placed on international sales. Those will be determined upon shipping and billed to the purchaser. Intention/notification to purchase will be made by e-mailing the artist at edriojasartist@gmail.com and taken in order of time stamp. Payment will be accepted by either check or via PayPal. PayPal totals will be more, based on PayPal’s transaction fee. It is improbable that shipped pieces will arrive by Christmas. 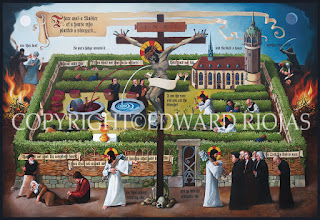 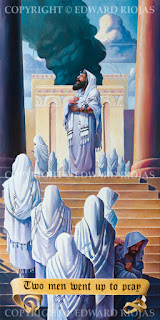 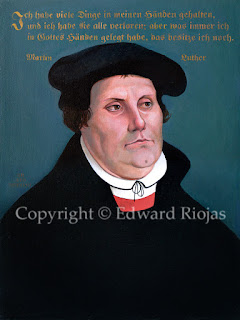 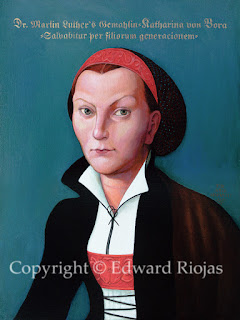 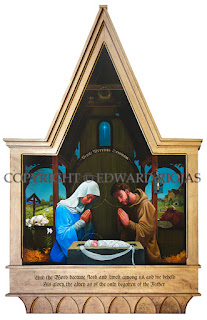 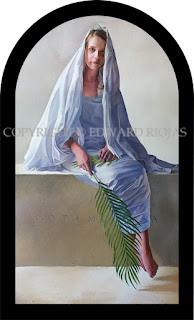 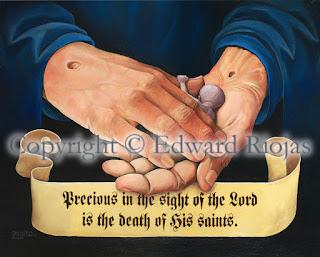 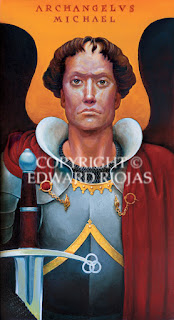 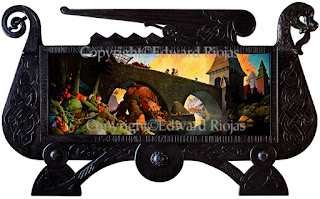 
Posted by The Art Curmudgeon at 4:40 AM No comments:

The figure is centered, but he is not central. He is conspicuous, but he is not preeminent. He is illuminated, but he is not in the light. The composition of my newest piece, “Two Men Went Up To Pray,” belies the focus of the painting, and this was done with great intention.

The Pharisee appeared to be the paragon; the epitome of temple worshiper. When he awoke that morning, a quick gaze at the stripes of his tallit in the predawn light told him it was time for prayers. He put on the visage and garments and trappings of one who dared to enter the Temple courts. His grizzled payots lay next to his carefully-groomed beard. His shel rosh and teffilah, phylacteries bound to forehead and arm, carried bits of the Torah. His tassels were long. He covered his head with the prayer shawl and headed to the Temple. But he forgot something.

The Publican, on the other hand, had little to bring. With so many sins burdening him, pride had been left behind. He stood out among the others on the Temple grounds. Perhaps they saw his Augusticlavia, a piece of clothing Roman Equites wore – the social class to which Publicans belonged. Perhaps he had no tassels or phylacteries at all. Perhaps his prayer shawl was not recognized as Kosher. But he was recognized.

“Two men went up to the temple to pray.”

From childhood, we have also been taught of the discomfort with which the Publican prayed. He avoided the Temple limelight and stood far off. He could not bear to look heavenward, but beat his chest, and begged, “God, be merciful to me, a sinner!” This is the picture of misery. This is a man who dares not come out of the shadows. This is one who might crawl under a rock. For those of us who have felt this and felt it keenly, we know it is not a happy place. But it is a most blessed place, for the sacrifice of a broken and contrite heart is what our Lord desires – not the scent of burning cattle from a thousand hills. This contrite heart is what the Pharisee had forgotten.

The point of this piece can be seen in small details of the painting. Hand gestures, in particular, clarify the essence of this passage from Holy Scripture. The Pharisee’s hand sits comfortably on his own chest in admiration of the superior man whom God has made. The Publican’s clenched fist beats his own chest in abomination of the man who has offended God and men.

But there is a hand from a third figure – One who is hidden in plain sight. This person gives consolation, in a simple gesture, to the burdened shoulder of the Publican. That hand is the focus of the painting. The wound on that hand is the epicenter of this passage and, indeed, the whole of Scripture. That wounded hand is evidence of undeserved Grace. This is how the one man went home justified.

Even as we read of the two men who went up to the temple to pray, we are reminded of another Who prayed. In His High Priestly prayer, Christ prayed, “...“I do not ask for these only, but also for those who will believe in me through their word, that they may all be one, just as you, Father, are in me, and I in you, that they also may be in us, so that the world may believe that you have sent me.”

NOTE: Listed sizes are for the image itself – there is an extra one or two inches of white space all-around to aid in framing. Prints are signed, but are not matted or framed. Domestic shipping, etc., is included in listed prices. International orders will have additional shipping and duty charges.

To order prints, or for more information on either the original or prints, please e-mail the artist at edriojasartist@gmail.com

I'll Bet That Idea Sounded Better In Your Head

Between Halloween and Advent, there's this season called "Stupid." This is the time when knuckleheaded advertisers blast us with jingles like "We wish you a merry Kia" [I am not kidding], and other such drivel. I guess it shouldn't surprise us that not everyone understands what Christmas is about, let alone what constitutes good taste in gift-giving. Still, we somehow expect Christians to have a better grasp of things when it comes to Christmas gifts. I'd call it "great expectations," but someone has stolen that line. Anyway, here's a sampling of real merchandise that should be left off every one's Christmas list. Unless you really enjoy the season of Stupid...


Put a lid on it: How 'bout an upholstery-tack-encrusted, Western-infused, cowhide-wrapped toilet seat cover emblazoned with a cross? I don't even know where to begin with this thing, even though we all know where things will end. Not only is this flush with bad taste, but it's also overflowing with incongruous motifs. Just say "No" to...    Oh, for heaven's sake, just say "No." 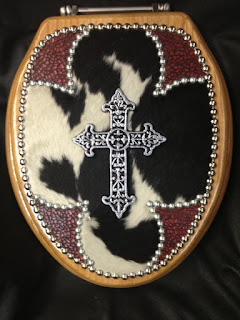 Footnotes: The target audience for these socks must surely be test-weary seminarians. Why else would anyone want Bible verses hidden under their pant legs? For those wondering, this only comes in the King James Version. Apparently, there's a copyright on the ESV. 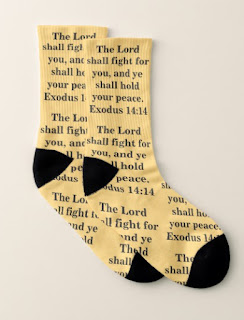 "No, you may not wear that to church, young lady:" Just because a piece of abbreviated apparel has a Bible verse on it does not make it a great addition to your wardrobe. Besides a bit of Scripture, this mini-skirt has "Stupid" written all over it. 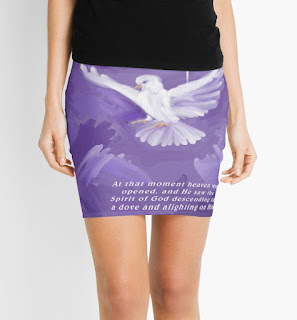 Sweat it out: If the 10-mile run to the donut shop doesn't make you sweat, then certainly this stupid paraphrase, taken out of context, will do so. (Note: 20 lb. water bottle and Joel Osteen ear buds are sold separately.) 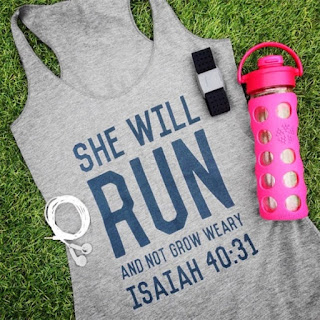 Fall wardrobe: Someone thought a Bible verse and a [poorly placed] snake would look great on a mini-skirt. See what I mean about the season of "Stupid?" 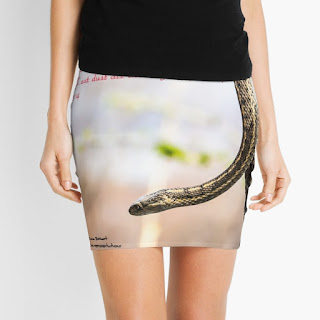 Lose this in the wash: Some fashion designer became possessed, and shortly thereafter Bob was gifted with Psalm shorts. Bob, we're begging you to go back to the cutoffs. Yes, the ones with the pockets showing. 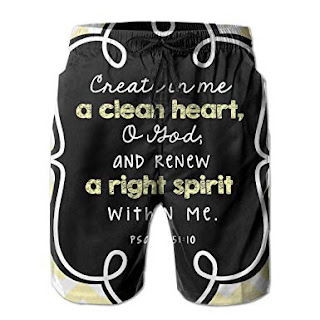 Doggone it: Someone has high hopes for Fido, who not only is embarrassed by the misuse of Scripture, but is also seriously doubting whether the silly shirt will help with his potty training. 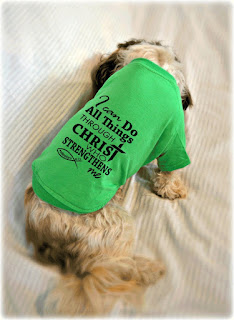 Things unseen: Ugh. What were they thinking?! The definition of Faith on a white pencil skirt?! If you are gifted with this fashion faux pas this Christmas, please re-gift it to the nearest dump. Especially if your name happens to be Faith. 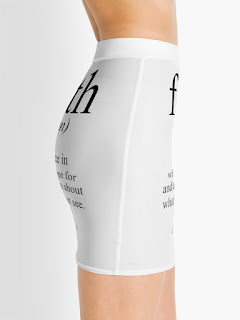 If you can read this, then you're too close: Guys, by now you should know the difference between Holy underpants and  holey underpants. Get rid of them both. Even if they are a gift. Even if they inexplicably have Joshua 1:9 written on them in four-point text. 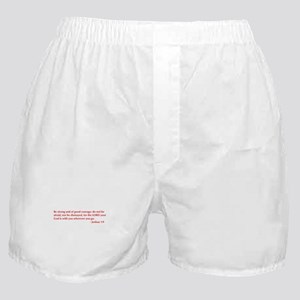 Resort wear: Not only does His love reach to the heavens, so also does some one's poor taste in swim trunks. Just put them back in the gift box and declare, "It's exactly what I didn't want for Christmas." 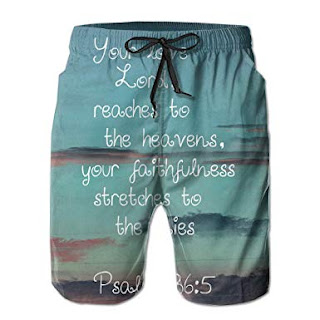 Posted by The Art Curmudgeon at 3:21 AM No comments:

“God’s Own Child I Gladly Say It”

This project began years ago, during what seems a different lifetime. In fact, I couldn’t pinpoint the original date of inquiry because at the time I was using an old, office e-mail address. My best guess is five years ago or more – another lifetime, indeed.

Through various revisions and lapses in time, the project evolved into its final form. The “God’s Own Child” Mural was designed for a hallway in the environs of a music conservatory at St. Paul’s Lutheran Church, Council Bluffs, Iowa. God willing, the conservatory will soon become the home base of “David’s Harp,” a new LCMS Recognized Service Organization that, among other things, bolsters the work of encouraging and developing young church musicians. It is fitting that such a beloved hymn is held up before music students on their daily walk.

Even the most tone-deaf among us, however, can do well to remember the hymn’s words on our daily walk. To that end, while we may not be able to wander the halls in St. Paul’s, it is now possible to hang a smaller version of the mural on our walls as a good reminder of our Holy Baptism. And, in case you need a bigger reminder, the print is available in some rather gargantuan proportions. The framing, however, is your responsibility.

Note: Listed sizes are for the image itself – there is an extra one or two inches of white space all-around to aid in framing. Prints are signed, but are not matted or framed. Domestic shipping, etc., is included in listed prices. International orders will have additional shipping and duty charges. To order, or for more information, please e-mail the artist at edriojasartist@gmail.com