Michelangelo famously said, “In 200 years no one will care.” That was his brazen response in the early 1500s to an irritated member of the ruling Medici family in Florence, who claimed that a particular funerary bust bore little resemblance to the recently-departed family member. Michelangelo was right. He was also wrong.


It doesn’t take a stretch to understand the profound loss surrounding a family death. Those feelings usually extend to memorializing the dead, from the smallest gesture to the most grandiose. The grieving don black arm bands, festoon the house with yards of black crepe, and buy hideous floral arrangements at exorbitant prices. To make the memories last, wealthy families sometimes commission memorials that are unforgeable, and size matters when it comes to a monument.


But monuments tend to be public, and the masses are not so affected by loss as is a family. The grandest of monuments become spectacles in themselves and lose the personal connection intended by a grieving family. The tombs in the Medici Chapel in Florence were no different. I’m sure few empathized with the grieving family by the time 20 years had passed. We look at the figures Michelangelo wrought and see the talent of the artist. We recognize little of the dead entombed there, and we could care less. 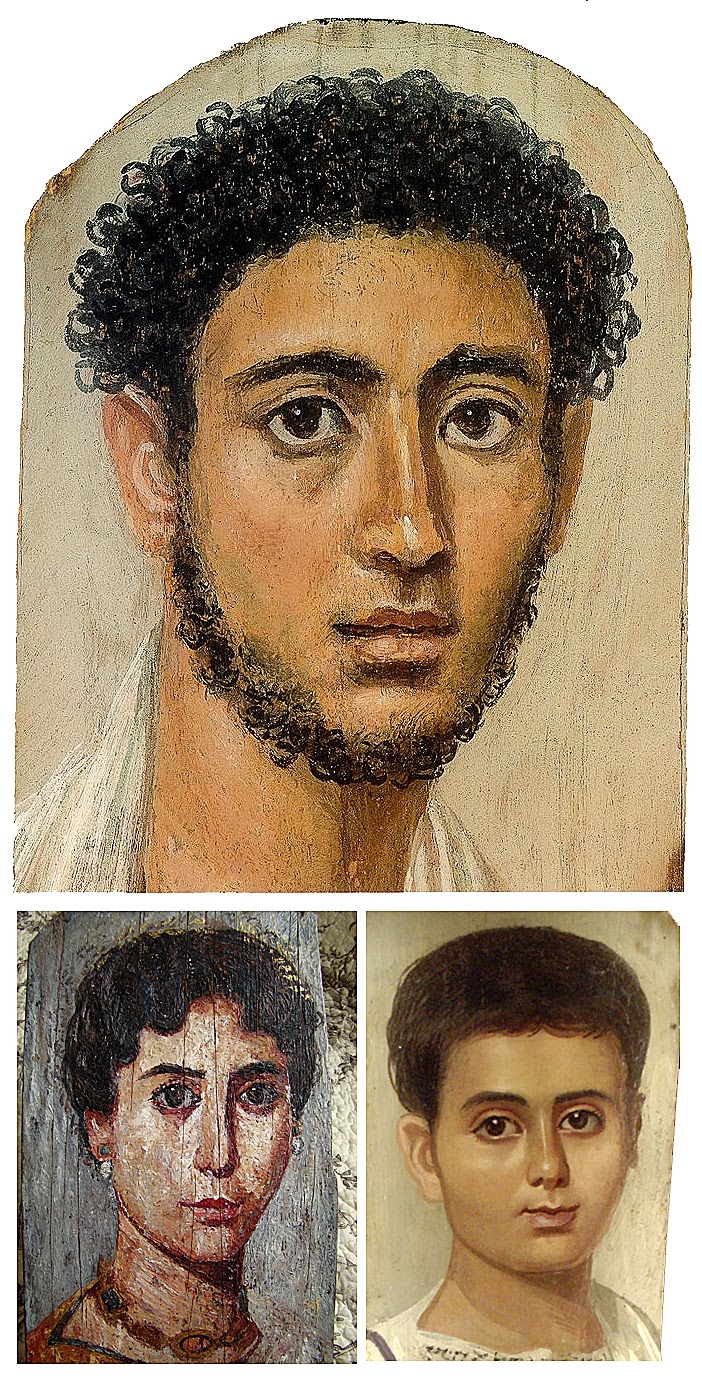 Not every culture is into grandiose monuments, and not every civilization has the benefit of being graced by an artist so talented and ambitious as Michelangelo. One would think that even ancient Egypt might side with Michelangelo’s pragmatic sentiment, as the civilization seemingly knew nothing but gargantuan scale and stylized human form. However, deep in the shadows of the pyramids of Kufu and Khafre and eclipsed by the Great Sphinx of Giza, there exists a small hiccup in time when the view of the dead was very different. Enter the Romano Egyptian era.


A kind of intense personal grief can be felt in the mummy portraits of this period. There is no trace of stylized portraiture from the centuries preceding. The polish of fine stone and the nose-in-the-air poses of elevated status are gone. But the faces of the dead weigh heavy on our hearts. The unforgiving encaustic process of infusing pigments in wax has left a richness of color and life that belies the muted corpse behind each portrait. We don’t see heroic visages  ̶  we see the wife down the street; we see the guy with the hearty laugh; we see the running child.


The odd effects of Roman influence on Egyptian culture produced this view of humanity that is stripped of pretentiousness and idealism. The reality of death and its affect on our fallen race hits home, and we feel as if these foreigners were family. Never mind their religious beliefs or political leanings or social standing. These were real people, and they are gone.


Perhaps Michelangelo’s Medici debacle was a self-fulfilling prophesy in leaving us devoid of feeling for the aristocratic family. We feel the effects of death over mankind, but we don’t feel the same for a man. One wonders what Michelangelo would have thought of those Egyptians whose timeless portraits still cause a twinge of sorrow more than 2,000 years after their demise.

Posted by The Art Curmudgeon at 9:34 AM