Apparently, there are way more artists at ArtPrize than previously thought.

For those of you who don’t know, ArtPrize is the best artistic thing EVER to come to West Michigan, certainly the Midwest, and quite possibly the entire U.S. of A. It’s a ginormous contest in which hundreds of venues host thousands of artists competing for a purse of hundreds of thousands of dollars. Yes, it’s colossal. It’s impressive. It has grabbed the attention of the art world. And I hope it never goes away. 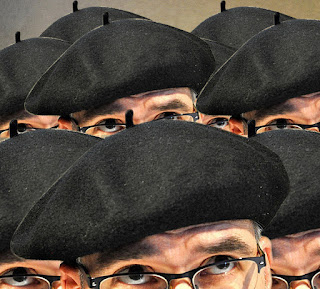 While not being a fault of the event, ArtPrize does seem to be an effective catalyst for some really dumb things being said out loud regarding the fine arts, and here’s a doozy: “Everyone is an artist.” I heard that not-so-brilliant line uttered on air by a local DJ, and two other DJs immediately agreed. Ignorance must be highly contagious, because I’ve heard similar comments by the pedestrian crowd during ArtPrize.

Here are the facts: I’m sorry, but not everyone is an artist. Neither is everyone a brain surgeon. Here are a few more related facts: A box of band-aids doesn’t come with a medical license. Having a socket set and a couple of pliers doesn’t make you a mechanic. You might have been dragged into court, but that doesn’t make you a lawyer. Your flag football injury does not make you an expert on the NFL. And throwing a few words like these on a goofy blog page doesn’t make me a writer.

I realize that definitions of some professions are sort of fuzzy around the edges. I also realize there is a massive spectrum of talent and proficiency among all professions – even brain surgeons.

Even though a Fine Art degree is lurking in a musty box somewhere in my house, conferred degrees like mine don’t necessarily define an artist. I’ve known exceptions to both sides of that argument. I know an artist who barely has any art education at all, but there is no doubt he is an artist. In his case, a single finished piece is proof enough. His portfolio makes it undeniable. I also know of others who have plenty of art education under their belts, but can’t draw well enough to save their own lives.

Even in this murky world with its ever-deteriorating view of art, most people with a brain at the end of their neck have an idea of who really is an artist and who is a wanna-be. Those folks who have a doorknob where a head should be are the ones who say stuff like, “Everyone is an artist.”

Now I’m not telling you to refrain from painting or drawing or sculpting. Dabbling in art is good therapy for folks with heavy emotional baggage, which includes a sizable chunk of society. The simple act of moving hands around a complacent surface tends to even out emotions, and provides a vehicle for self-expression – the good, the bad and the ugly. What is more, I encourage you to try your hand at an artistic discipline, if only to make you better appreciate those who work hard at honing their artistic skills. And don’t forget that creating art is fun. I don’t want to keep all the fun stuff to myself, and I encourage you to go for it.

The sad, but honest truth is that not everyone is an artist, and it doesn’t take a brain surgeon to see that. I’d kick this dead horse a bit more, but someone is coming over for a lobotomy and I best get at it.
Posted by The Art Curmudgeon at 4:04 AM