It's April Fools Day, so I thought I would lighten things up by throwing a few barbs at the pagan side of Easter. Frankly, I can't think of a more sorry lot than those who hold fast to bunnies and eggs and marshmallow Peeps, while totally ignoring the resurrected Christ.

I will, however, withhold judgement on the moronic sentimentality of the pagan crowd, and will instead allow you to form your own opinions based on some old-timey Easter greeting cards. And yes, my sympathy goes out to the anonymous artists who were forced to create this waste of time and talent – most probably with gun barrels to their heads.

Let's start with a questionable symbiotic relationship in the animal kingdom: Rabbits and chickens. Actually, it isn't a symbiotic relationship, because the chickens obviously get the raw end of the deal. Check out this rabbit who is bent on having a yummy breakfast at the expense of Mrs. Hen's children. 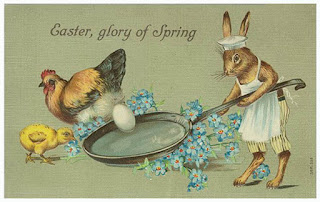 There is also some strange fixation on Mr. Rabbit's part that is just wrong. Here he is schmoozing up to one of the chicks at a dance. We've got our eye on you, bud. 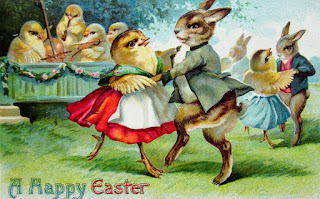 And what is it with Mr. Hoppity-hop and his pals? And holding hands? There's got to be a bad egg in the bunch. 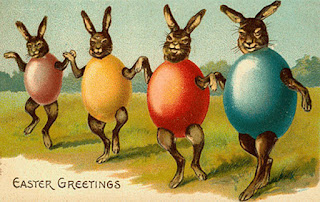 Demented rabbits isn't enough, so let's throw in some mean kittens to make the holiday bright. 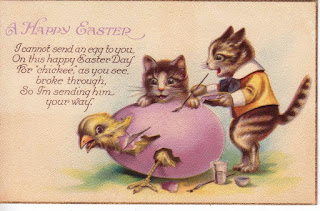 Thankfully, stupid Easter cards isn't just a thoroughly-American thing. My apologies to the Dutch, but, really, you KNOW the Easter bunny-thing is wrong, don't you? 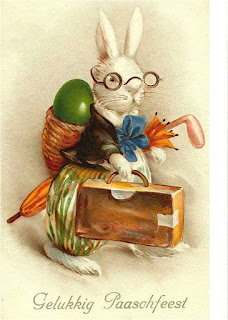 Now here's something that is headed for disaster. Oh, the humanity! 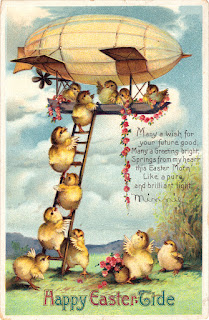 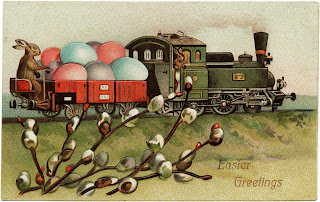 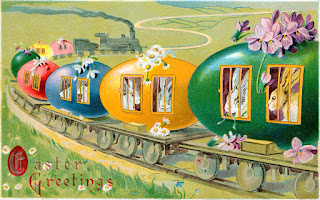 Kids, that's a T-Rex egg. Put it back before your mother freaks. 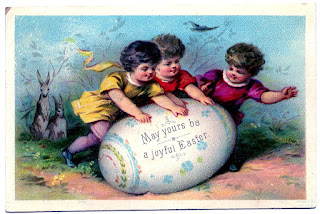 A pagan Easter isn't confusing enough, so let's throw in some four-leafed clovers and a drunken leprechaun in a mobile home. 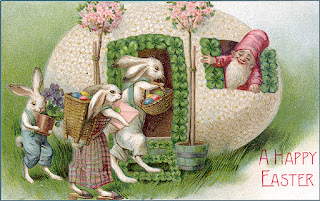 Finally, here's a little lesson about the Easter Bunny and the dangers of crossing an Interstate highway. Clearly, Jesus was the co-pilot in that 18-wheeler. 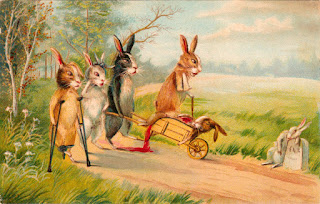 Posted by The Art Curmudgeon at 4:30 AM