For those whom I have offended, please forgive me. For those who ever sought my forgiveness, you will always have it.

That second part may, at first glance, seem presumptuous, but we all need to reminded of genuine forgiveness from others – especially from God. We must allow ourselves to indulge in that gift without exception. 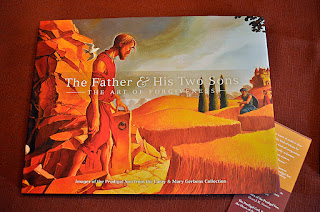 I was reminded of this while attending a luncheon last week celebrating a second edition release of “The Father & His Two Sons: The Art of Forgiveness.” The book is a catalog of art collected by Larry and Mary Gerbens and bestowed on Calvin College in Grand Rapids, Michigan. I was commissioned to do a piece for the collection, and my piece again graces the book’s cover.

In his presentation on the collection, Gerbens noted truthfully that it is sometimes easier to forgive than to be forgiven. I have been in that boat. Perhaps you have, too.

The Lord is, of course, the Master of forgiveness, and has blessed ignorance of sin once forgiven. Christians attempt to mirror that forgiveness toward others. It always takes massive help from above to manage real forgiveness when we are on the giving end.

But being on the receiving end of forgiveness makes us uneasy. We either question the possibility that we can, indeed, be forgiven, or we entertain the equally-ugly sister that questions our need to be forgiven in the first place. And if we finally release our minds from guilt, we often feel indebted to those who are so gracious to us.

Feeling indebted to the Lord, however, can be a grave mistake. Some attempt to repay that debt by climbing gold tassels to perfection. Others beat themselves into bloody pulp or allow their own crucifixion in order to settle the score. But a gift that has strings attached is not a gift. Grace that has stipulations is not Grace at all. Forgiveness that demands restitution is not true forgiveness.

As prodigals, we are daily drawn back to the Father by His blessed forgiveness. In our ragged and haggard state, we can do nothing but accept the forgiveness He freely gives.
Posted by The Art Curmudgeon at 3:00 AM