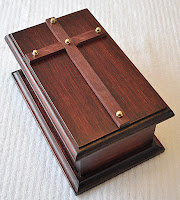 I built the little casket in such a way that its lid is secured by bolts piercing a cross – representing the five wounds of Christ. In death, Perpetua Felicity – whose name means “Everlasting Happiness” – is held by the victorious cross of Christ. In life eternal, she will be held by the same. And that is huge.
Posted by The Art Curmudgeon at 3:36 AM