The Process of Elimination

When asked how he accomplished his masterpiece, “David,” Michelangelo famously responded, “I created a vision of David in my mind and simply carved away everything that was not David.” One must wonder which Michelangelo was speaking – the eloquent master who affected so much of Renaissance art, or the smart aleck who had a knack for giving offense.

Subtractive sculpting uses a bass-ackwards way of thinking, and Michelangelo gave a hint with his oversimplification. In its most pure form, in which a large block of stone or wood is finally reduced to a thing of beauty, there is no way to erase a mistake. Gluing a piece of over-zealously-gouged wood back onto the piece is not a good option. Doing the same with stone is an impossibility. In that regard, a greater deal of forethought goes into subtractive sculpting than its additive counterpart.

“Corpus” was recently installed at Our Savior Lutheran Church in Pagosa Springs, Colorado. It’s worth seeing a few photos of the process to appreciate what goes into – or rather, what is taken away from – a simple piece of wood.

Because it is extremely hard to find a single piece of wood large enough to work subtractively, I initiated the project with a bit of additive sculpting. The Corpus proper would start with four pieces cut from the same piece of basswood. 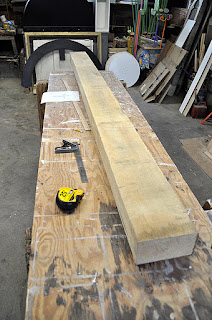 Arms would be bolted to the torso, and the head would be glued and screwed to the front of the torso. It was critical to make the joints as tight as possible, yet accessible enough to accommodate disassembly and reassembly for shipping and beyond. 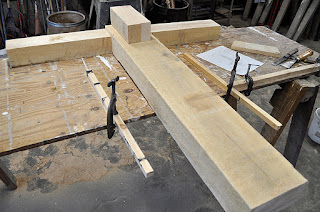 Because basswood – a wood commonly used by carvers – is extremely soft, hanger bolts with substantial grip were employed to hold the arms in place. 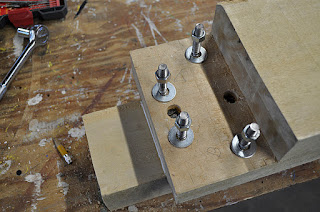 Once the body blocks were constructed, lines were drawn on the blocks indicating the general form of the finished piece. Roughing out was done with power tools, including a drill fixed with a Forstner bit and a saber saw. Large gouges were also used. Throughout the “wasting” process, it was imperative to keep in mind the unseen visual limits of the finished surface. 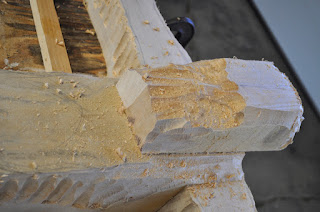 Once rough wasting was complete, a different power tool came into play. My weapon of choice is a professional Dremel tool, fitted with a flexible shaft and foot pedal. Various heads can be used, including a carbide shaping wheel. Wearing a good respirator is a must. The tool works at such high rpms that it throws fine wood powder by the bucket load. 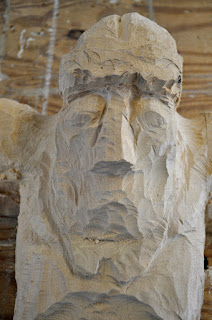 As work continued, smaller amounts of wood were subtracted. The head went through a metamorphosis in which different facial types replaced previous ones. As in drawing or painting, the slightest changes in facial features create a different likeness, but unlike those two disciplines there is no going back.

Areas that would have the most detail, such as beard and hair, were left for last – subtleties of the skin had to be first smoothed. 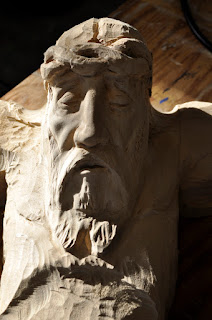 Because wood is susceptible to damage where extremely delicate details and grain of the wood are concerned, the thorns of the crown – cut from the same wood – were shaped and fitted into sockets. 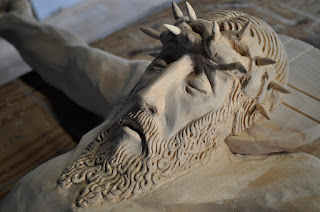 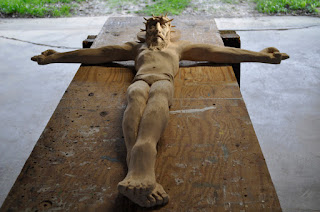 Specialty hardware that replicated rough-cut spikes was used to secure the Corpus and its accompanying tabula to an existing cross in the church chancel. 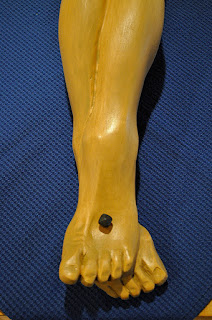 Posted by The Art Curmudgeon at 7:17 AM