This probably comes as no surprise, but my mom is smarter than some folks in D.C.

As a slight departure from my usual drivel, I thought a quick drive down the bumpier parts of memory lane, courtesy of my mom, would be appropriate for the Fourth of July. (You will have to suspend your eager anticipation of my thoughts on the lovely and not-so-lovely aspects of the art world. Well, at least for this week.)

Years ago, I intercepted a small stack of my mom’s high school things that were intended for the trash. I may feel differently about my own high school mementos, but the things of my parent’s generation are worth remembering and keeping. That is particularly true, given the current political climate of our nation.

In the stack of things, there were some special items, including a graduation card filled with very tender words, given to 17-year-old Laura Weppler from a man ten years her senior. Both would eventually become my parents. There was a corsage pressed flat. There were report cards from Godwin High School, where my mom graduated. There were essays my mom wrote.

One set of papers looked like organized notes, written in well-crafted cursive. I initially assumed it was for a history class, but then realized she was writing about current events. The year was 1944. The first few lines of the notes on the “German Natzis” [sic] are stunning, if not condemning, for those Americans who today lean in a peculiar direction.

Without pushing a political agenda, the high school teachers of my mom's day taught the ugly, unvarnished truth that made the world what it was. One cannot read the words from 1944 without immediately seeing that several politicians of our day not only have a grievous lapse of memory, but also a horrendous lapse of judgment, as well.

This our parents learned and we, in turn, were taught, yet there are those who aspire to lead us headlong down a forgotten path of the same ideology. We dare not follow. The “Greatest Generation” had no qualms about fighting for what was right, and sacrificing without question those things that were dear, including life itself. There were also sacrifices which now seem incomprehensible, including self-identity. It was a time when patriotism meant putting aside personal gain, assumed rights, and juvenile desires in favor of national unity. In writing unapologetically as a citizen of the United States, Mom spelled out the fallacies of a foreign, socialistic government, brought to light the errors of its teaming masses, and strongly defended the governance of the U.S., even though Mom’s name, her relatives, her native culture, and the language formerly spoken in her home ... were all German.

I doubt that any of mom’s generation will ever forget those years – neither will most of the children of that generation. Those who forget history, on the other hand, are doomed to repeat it. 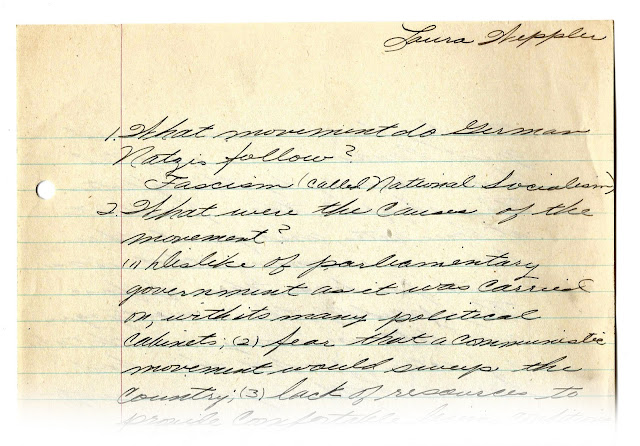 Posted by The Art Curmudgeon at 10:34 AM