“So Firmly Sin Possessed Me” 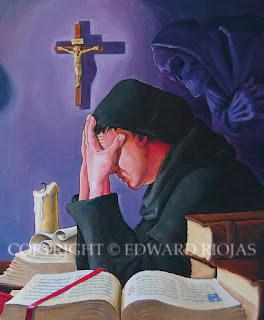 Fast bound in Satan's chains I lay;
Death brooded darkly o'er me.
Sin was my torment night and day;
In sin my mother bore me.
But daily deeper still I fell;
My life became a living hell,
So firmly sin possessed me.

Not every waking moment of the Christian’s life is filled with joy and exultation. Sometimes life seems to have little meaning. Oftentimes Satan wheedles his way into the nooks and crannies of our being and threatens to undo us at every turn. Sometimes life just sucks. It is very comforting for us, therefore, that Martin Luther opened up and revealed the less-heroic corners of his mind.

Illustrating this stanza of “Dear Christians, One and All Rejoice” (Kloria Publishing), was a bit of a challenge, and it was also one of the reasons I decided to use a historic approach to the book. Most of us are familiar with the intense doubt, the fear of damnation, and the self-flagellation which consumed the Reformer.

Besides Death visually looming over Luther, there are other clues to his inner turmoil in the illustration. I intentionally included an unlit candle. The man could not yet see the Light of the Word in its fullness. Divine Wisdom was not yet his. Although volumes lay before him, he lived in the dark; he was constrained and tortured; he was “Fast bound in Satan’s chains.”

It is almost as if the viewer of this illustrations WILLS the plagued figure to simply raise his head and see the image of Love and Grace before him; we want him to look to Christ as the all-atoning sacrifice, not only for Luther’s sins, but for the sins of the whole world.

Thus far I don’t plan to offer giclée prints of this image – that is, unless someone twists my arm. 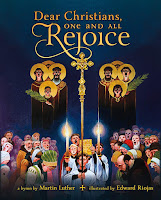 Posted by The Art Curmudgeon at 3:29 AM