What’s in the Junk Drawer of Christendom

I’m serious. Soon it will be confirmation season, followed by graduation season and then ordination season. I could shamelessly point all you gift-giving folks toward my giclee prints and original pieces, but let’s put that aside. For now.

Once in a while it’s nice to open the junk drawer of Christendom to see all the crap contained therein. Please don’t get any ideas, or ask where you might obtain such treasures. If you’re that hell-bent on such purgatorial trash, then you’ll have to roam the back alleys of questionable taste all by your lonesome. Once you've done that, feel free to enter gift-giving at your own risk.

For starters, I COULD have mentioned a certain musical bottle opener that supposedly commemorates a certain 500th anniversary, but I won’t. Instead, I offer a much worse option – The “Sacrament Bottle Opener.” They could have saved themselves some trouble and simply imprinted the thing with the word “Heresy.” Beyond that, I don’t even want to know.

Here’s what happens when pea-wits start using the creative side of their heads. I will try my hardest to put the best construction on the idea and assume it horribly came to life when someone mentioned “confession” and another heard “confection.” The result is wrong, wrong, wrong. 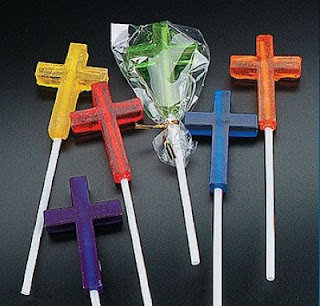 It’s hard to go wrong with a wooden cross, but manufacturers are proving me otherwise. This is meant to be completely ergonomic. It is meant to be held in one's hand during fervent prayer. It is meant to be chucked in the garbage. Unless you are planning on using it for an ice scraper or a throwing star, I would opt for something that actually looks like a cross. 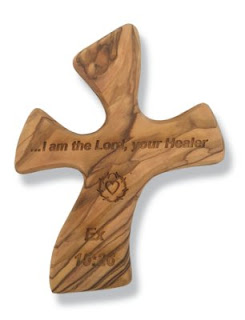 Speaking of wooden crosses, don’t do this. Don’t go take a clunky bunch of mesquite, attach a [lucky] horse shoe to it with baling wire and call it a cross. This one comes with the optional belly button. Or maybe it’s a doorbell to heaven. If you’re that much into Western stuff, just go buy a belt buckle. 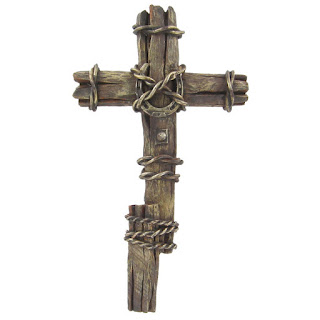 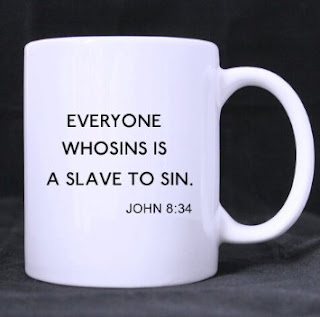 Here’s what everyone wants to unwrap: A claw hammer with a Bible verse on it. How long do you think it will take folks to discover you really CAN’T do all things? Well, at least on the construction side of things? Oh, sure, you’ll call on the Name of the Lord when you hit your thumb for the umpteenth time, but that’s an entirely different matter. 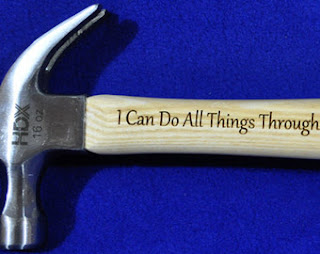 Finally, here’s what not to get anyone. Ever. Jesus isn’t anyone’s coach, so just knock it off. Jesus is the Christ. And while we’re at it, don’t demote Almighty God to your stinkin’ Co-pilot or Buddy or any other inane title. I’m serious. 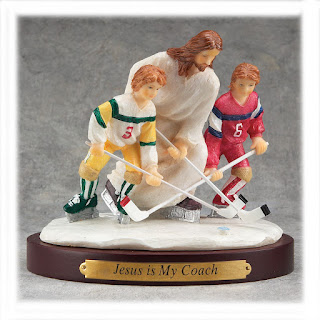 Posted by The Art Curmudgeon at 3:24 AM No comments:

“The Fight Between Carnival and Lent”

Pieter Bruegel the Elder pretty much nailed it on the head.

I have always loved the artist’s use of rich, earth colors – especially his reds. Bruegel’s penchant for focusing on the rusticated life of country folk usually brings out an attractive warmth in the genre, but this image takes a step toward symbolism that leaves the viewer extremely uncomfortable.

In spite of a mass of evenly distributed figures, there is polarity in the painting. On the left is an inn, around which hover revelers. On the right is a church, from which issues alms-giving penitents.

Front and center in the composition is a portly, bacchanal figure astride a large barrel. He is the embodiment of Carnival, with all its wanton vices. Facing him is “Lady Lent” – gaunt, and miserable, and nearly as ridiculous as her festive counterpart.

In the shadowy interior of the church, shrouded statues of saints – common Lenten practice for the time – occupy high places on the walls. Meanwhile, a crucifix rests on a cushion on the floor.

This painting is simply unnerving. One needn’t dig into the mountain of symbolism it contains to immediately understand it’s point. The pull between the Old Adam and the New is a massive struggle. The artist has nearly given us a hideous shopping list of the foolishness of man. But Carnival isn’t necessary. Humankind doesn’t need to invent things for which to be later penitent – sin will always revel this side of heaven, even without our trying.
Posted by The Art Curmudgeon at 3:52 AM No comments:

Cranach, on the Other Hand

His portfolio is jam-packed with some of the best art of the Northern Renaissance. His portraiture of nobility, clergy, and laity is so complete that we can instantly put a face to a historical name. His depictions of saints, martyrs, and events of the Lord’s life stretch to the horizon. Even the Renaissance must-have genre of Classical mythology is given a place. And then there’s Lucretia.

Lucas Cranach the Elder and his workshop produced an amazing amount of artwork, but the most-frequently painted secular subject is that of Lucretia. The Cranach Digital Archive has cataloged dozens of versions of the woman’s image.


We could scoff at those pieces as being unsuitable fodder for such a sacred artist, but it is difficult for the modern eye to look at Cranach’s world without Renaissance glasses. Society was not as much concerned with expanding its knowledge of all things as it was enthralled with all things Classical. That meant anything culturally-connected with ancient Greece and Rome, including the more stupid parts – mythological stories. But Lucretia was not a mythological figure.

The woman was a real person that lived during the waning days of the Roman Kingdom. Because of variations of her account, Lucretia has been categorized as “legendary.” Apparently, that’s a notch or two above “mythological.” Still, the core of her story fits with the course of history.

Lucretia was blackmailed by the son of the last Etruscan King, Lucius Tarquinius Superbus, and consequently raped. The woman, having a conscience and principles higher than the Imperial standard, told the King of the deed in the presence of witnesses, and promptly committed suicide. That was c. 508 BC.

Her actions set in motion a rapid demise of the kings and their tyrannical line in favor of a Republican Rome. In spite of her suicide, Lucretia was afterward seen as an example of noble character and virtuosity. This carried over into the Renaissance view of women in a strange duality of seductive temptress – which was actually aimed at the foolishness of men – and virtuous heroine.

But there might be another reason for the popularity of Lucretia in the Germanic lands of the 1500s. Her heroic act of defying a kingdom, not for personal gain but for what was right and just, certainly resonated with those chafing under the yoke of a very different Roman rule. Of the nearly 50 known versions of Lucretia painted in Cranach’s workshop, only three have been confirmed as being painted before Luther nailed the 95 theses to the door of All Saints’ Church.

Posted by The Art Curmudgeon at 3:36 AM No comments:

As an artist, it’s almost too easy to tackle the Parable of the Sower. Agrarian visuals were straightforward for the Lord‘s listeners; His words were something even the simplest in the audience could envision. The underlying meaning was a different matter.

Three of my pieces are variations on the artistic theme, and each possesses increasing complexity.

Perhaps the simplest is the black and white roundel created for the Higher Things Ecclesiastical Art CD. The image was part of the collection intended to illustrate readings for the Historic One-Year and New Three-Year lectionaries. In the image, the sower is simply sowing. There is no visual differentiation made between good and bad soil. Indeed, there is little of the arable land for the viewer to see. The sower is simply intent on sowing until the basket is empty of seed.


A much larger painting on the subject still plays it visually safe, following a formula used by Pieter Bruegel the Elder. The sower sows in a plowed field. A nod is given to thorns, rocky ground, and a path. Focus, however, is given to the good soil, and a banner underscoring this unfurls below the image.

Most complex of the three examples is “The Sower of the Seminary,” a triptych commissioned by a graduating class at Concordia Theological Seminary in Fort Wayne, Indiana. I was “blessed” to work with not one, but two committees in finalizing details of the painting. The result is a piece that is abruptly different from the preceding two pieces.

A triptych form was necessary, considering the basic parable was overlaid with emphasis on the Word and Sacraments, two events from Christ’s life, additional Biblical references, and all set against a backdrop of the seminary campus. The whole was intended to be viewed as three windows opening on a single landscape.


Holy Baptism is the theme of the left-hand panel, and is primarily filled with the Baptism of Jesus Christ and manifestation of the Holy Trinity. There are details, however, that should not be missed. A scallop shell points to the sacrament, as does Noah’s ark and its implications of the flood. And one must look closely to see an Egyptian chariot beneath the water – another reference to the cleansing of sin through Holy Baptism.

The Lord’s Supper is the theme of the right-hand panel, and depicts the Supper at Emmaus. Originally, the arms of the Lord were more transparent – as in the state of vanishing – but that detail was eliminated for the sake of clarity. Thorns of the planted field have been worked into a crown below the table, and above the Emmaus tableau a view is given into the Heavenly Feast, with the victorious Lamb as both Host and Meal.

Central to the piece is Christ in the role of sower. In His divine recklessness, he broadcasts the Word to all without exception, desiring all to be saved. Thorns and a rocky path interrupt rich, plowed soil. A satanic bird eyes the seed with hunger.

It would seem that modern methods make the Parable of the Sower almost irrelevant. Almost. Broadcasting – as the Biblical sower does – seems wasteful and inefficient, unless one strolls today where massive, mechanized seeders have done their duty. Hard-packed row ends are common places to see piles of color-coded seeds – dropped as the tractor made a 180-degree turn with planting implement in tow. In my neck of the woods, one can also occasionally see half-full, discarded bags of seed after planting. Sowing, it seems, still errs on the side of gracious abundance. Our Lord has always sown His Word on us undeserving with reckless abandon, and, thanks be to God, He will do so until the final harvest.


Posted by The Art Curmudgeon at 2:48 AM No comments: