Putting The Child in the Back Seat

A annoyance occurs every year during the Nativity and artists are sometimes to blame.

It is subtle, and worms its way around the edges of Christendom, eating away at the fringe, but affecting the core, as well. What begins as an innocuous thing ends up, when allowed to continue on its logical progression, as heresy. I am writing, of course, of our Lord and Savior, Jesus Christ, and His mother, Mary.

The crown has long been one symbol associated with the Advent season and, by extension, Christmas. This originates from one of the “O Antiphons,” and runs through hymns of the Advent season. Lyrical phrases like, “The Advent of our King,” “Prepare a Royal Highway,” and “be Thyself our King of Peace,” roll off the tongue with tunes playing in our heads.

Hence, it shouldn’t come as much of a surprise that some artist in antiquity decided it would be swell to put a crown on the head of baby Jesus – this, in spite of His birth in a feed trough for livestock. But then something bad happened.

Whether because of a growing Marian cult, or because of some strange foreshadowing of gender equality, Mary was given a crown, as well. In the symbolic realm, however, a crown does not act as does a halo (nimbus). A nimbus is used for garden variety saints, but a tri-radiant nimbus is reserved for Persons of the Holy Trinity. That includes baby Jesus. No such distinction is made with a crown. Furthermore, when a crown is placed on an adult, it must be twice as large as the Infant’s. But sometimes the Child retained no crown at all. This is where subtlety was lost and things became dangerous.

Art began to mimic life, life began to mimic art, and the slippery slope of relegating the King of all creation to the back seat began. But we needn’t totally fault artists – music composers tripped in their own turn. The angel Gabriel’s announcement to Mary apparently wasn’t quite enough, so heretics and lyricists put a few more words in the archangel’s mouth. The “Ave Maria” ended up with a second verse, and it wasn’t at all the same as the first. “Hail Mary, Mother of God, Pray for us sinners...” goes off the deep end, and spirals into the netherworld.

While we may enjoy Renaissance depictions of the Madonna and Child, and while we may hum our favorite version of “Ave Maria,” it is important to draw critical distinctions. Unfortunately, those distinctions have become badly smudged, not only by Roman Catholicism, but also by some on the fringes of Lutheranism.

Prayers are offered to Mary and glory given to the same, while our King – and hers – sits as a darling afterthought on the lap of a queen. Lord have mercy! Of this, and so many other sins, we must repent.

The Word, which became flesh and dwelt among us, is living still and speaks even to this sin. Perhaps in knowing what would become of her perceived persona, the last words of Mary as recorded in the Gospels point in a far different direction than her devotees might expect: “Do whatever He tells you.”

An Article of Note 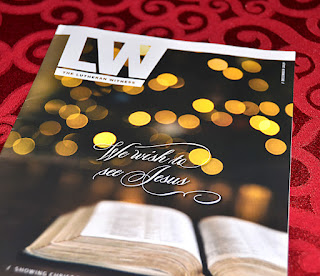 In my avoidance of redundancy [and copyright infringement], I'm pointing your attention elsewhere for just this once. I was asked to write an article for this year's December issue of the Lutheran Witness. Because it is based on a description of one of my pieces, and because it is worth contemplating the coming of our Lord, I'm urging to hunt down a copy and give it a read.

What wasn't stated in the article is the fact that giclée prints of the piece are available for purchase. Below are sizes/prices for the prints. To order or for more information, please e-mail me at edriojasartist@gmail.com

Posted by The Art Curmudgeon at 4:23 AM No comments: