Sometimes I change my mind.

An intimate part of creating art is the making of decisions. In fact, just about everything I do as an artist has to do with choices: How large should the piece be? What medium should I use? What will the image be? What figures will be in that image? How should they be posed, and what expressions should they bear, and what style will work best? Is that color too harsh? Is the quality of that line appropriate? And on and on.

Arguably, the decisions become more involved with sacred art. They also become more critical. The difference between playing it safe and being bold can have a direct bearing on what –  and to what extent – the finished piece confesses.

Years ago, when I was conceptualizing what has become one of my most popular images, I changed my mind about who was going to be in the painting. “Resurrection,” a painting that now hangs in the narthex of Our Savior Lutheran Church, Grand Rapids, Mich., was originally going to be a bit different. In the first preparatory drawing I did for the piece, the Victorious Christ had one foot on the body of Satan. It was a variation of an old convention, confessing that Satan was indeed done in by the death and resurrection of Jesus Christ. But then I changed my mind.


It wasn’t that Christ somehow failed to defeat Satan – He did. Rather, it was because I decided that Satan is such an idiot that he doesn’t deserve to share any of "the limelight" in the resurrection. Like a spoiled child that keeps up a tantrum; like the fallen angel that endlessly accuses, sometimes it’s best to simply ignore him. Sure, we know he's still there, but the guy is a total jerk and no one wants to invite him to the party.

So I did a second drawing without bothering to give Satan any undue recognition. If, however, you still think that Satan should be somehow represented as part of the redemption equation, feel free to imagine him as being very small, and still under the foot of our resurrected Lord.

Requiem for a Sanctuary

There are, of course, greater things on which to write for this Good Friday. The news, however, is sometimes hard to brush aside, and news with tragic, artistic overtones cannot be ignored by an artist.

The fire that destroyed much of the Notre Dame Cathedral in Paris jammed the news and social media this week. Fellow Christians were quick to remind us that, while beautiful and monumental, the church is not THE Church. THAT Church will never fall. In fact, so many fellow Lutherans posted words from the hymn, “Built on the Rock,” that writing on that theme would have been simply redundant.

The church building, we are told, will not fall, either. At least not entirely. As quickly as its steeple fell, talk of rebuilding put to rest any ideas of forever losing the famous facade. Pledges of money started pouring in from every unlikely part of the world, so we can rest assured that it will survive.

While undoubtedly a huge inspiration among the Roman brethren and the French, the Notre Dame Cathedral has also been an inspiration among artists, whether Christian or otherwise. Today’s post takes a look at a few images that not only give credence to artists’ reputations in capturing the landmark’s every mood, but also gives homage to the facade that gave inspiration in the first place.

Posted by The Art Curmudgeon at 4:31 AM No comments:

Not every painting is pretty. Sometimes a painting forces the viewer to look at uncomfortable things. When it comes to sacred art, sometimes that “thing” is our own sin. Yet there is often inherent in sacred art a double measure of beauty which defies all meaning save that contained in Holy Scripture. What follows are details of a work of mine, “Ecce Homo,” paired with Biblical texts to which the details point...


“He was despised and rejected by men, a man of sorrows and acquainted with grief;
and as one from whom men hide their faces he was despised, and we esteemed him not”
(Isaiah 53:3) 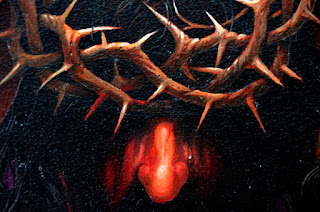 “He was wounded for our transgressions, He was bruised for our iniquities”
(Isaiah 53:5a) 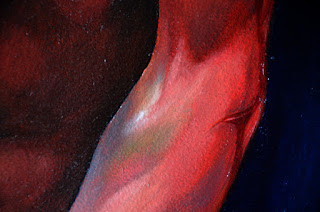 “Upon him was the chastisement that brought us peace, and with his wounds we are healed.”
(Isaiah 53:5b) 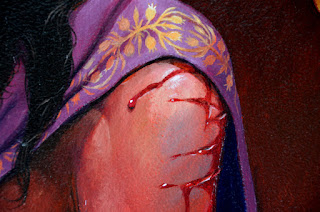 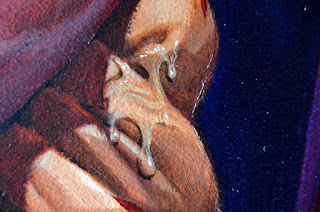 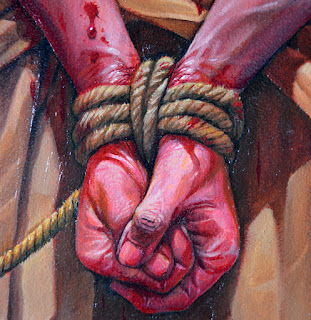 “And Moses took the blood and threw it on the people and said, “Behold the blood of the covenant that the Lord has made with you in accordance with all these words.””
(Exodus 24:8)

“In him we have redemption through his blood, the forgiveness of our trespasses,
according to the riches of his grace...”
(Ephesians 1:7)

Posted by The Art Curmudgeon at 6:58 AM No comments:

I am sometimes amazed at the stupidity of certain folks in Holy Scripture. Of course, that is only possible with Biblical hindsight and, of course, with the admission that I am often equally stupid.

Long after Jesus asked His disciples, “Who do people say that I am?” and after He asked the same of His disciples, the answer was given point blank. Unfortunately, folks didn’t like the answer, even when the Truth was standing in front of them and staring them in the face. Stupid happens.

There are seemingly countless events and references in Scripture that point to the Divinity of Jesus, but two very public events stick out in my mind – the culmination of His pointed discussion with the Jews in the Temple, and at His arrest in the the garden.

In His Divine forbearance, Jesus was trying to explain Himself, while in the Temple, to a Jewish audience, who only knew the traditions of men apart from the much older promise of a Messiah. Being hard of heart, the Jews were not being swayed. Their argument peaked with a telling question, and was given an infinitely-more telling answer. 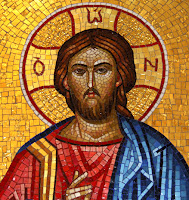 “You are not yet fifty years old, and have you seen Abraham?”

Jesus answered them, “Truly, truly, I say to you, before Abraham was, I am.”


This goofy, tense-warped answer was the last straw for the Jews, yet they somehow, stupidly, could grasp neither the meaning of Christ’s answer, nor His body itself for stoning, though He had been directly in front of them. Apparently, the ability to willingly disappear from plain sight was not on the Jews’ list of divine requirements.

This was later repeated when the mob sought to arrest Jesus. When He identified Himself as “I am,” they fell to the ground. The event must have been at once lamentable and comical. The armed soldiery acted as formidably as the Keystone Cops. They were so stupid that, after falling down, Jesus had to ask again whom they were seeking, as if to remind them where the not-so-polite conversation had been interrupted.

Both of these events point, of course, to the name of the Lord that had been revealed to Moses – “I am” – and it is why the Jews, in their ignorance, had cause to stone Jesus.

There is, interestingly, a small bit of Christian symbolism that confesses Jesus Christ’s answer to the Jews, and links images of Him to the name given in the Old Testament.

While Orthodox icons do not always get things right, and while the very use of their dated style is suspect, they do sometimes get things very right. In depicting Jesus, He is identified by the use of the tri-radiant nimbus. But Orthodoxy goes a step further.

It is tradition to have a Greek character in each of the three rays, appearing as “o w n.” This is shorthand, as is often the case in icons, for a longer phrase. In this case, it is very loosely translated as “He Who Is.” It is not simply a confession of Jesus as Christ in the New Testament, but a confession of the same as a manifestation of the Lord whom the Old Testament Jews had worshipped and, therefore points to Jesus as The God of all time, The Lord of all creation, and inseparable from His Father and The Spirit.

Posted by The Art Curmudgeon at 3:44 AM No comments: