This is the first of several posts that will be dedicated to a set of drawings in progress. The drawings are architectural in nature, though I do not claim to be an architect. The closest I can get to that vocation is claiming an older brother who IS an architect, and in admitting that I occasionally helped him with college projects. I can also claim to have learned rudimentary knowledge of blueprints when translating them into cutaway drawings during my 31-year tenure in the newspaper industry. No one has asked me to create these drawings – like a few other “odd” projects, I was simply compelled.

Originally, this post was to be called something like, “If I ran the Circus McGurkus,” but I’m sure there are countless copyrights and trademarks on such a title and, besides, the very idea was not close enough to my thoughts. Neither is this post about how church buildings should look, nor the ideal of what might have been. Rather, it’s a opportunity to contemplate what actually happens – indeed, what we confess happens – in Lutheran churches in particular.

Of course, church buildings run the gamut from grand facades to storefronts, and if there is any truth to the adage that “the Church is not the building,” then this would be a pointless exercise. That adage, however, does not say it all and falls woefully short of describing those peculiar houses that contain both the Lord’s children and the Lord Himself.

As with any structure, we must first make an entry. Unlike other buildings, however, the Church has a peculiar means of ingress. In my example, the building follows suit with a integrated Baptistry.

Many get their first taste of baptistry as a separate structure when studying Italian architecture. The famous “Leaning Tower of Pisa” is but one free-standing structure associated with the Pisa Cathedral. The leaning tower is a bell tower, but there is also a free-standing Baptistry that puts many churches to shame with its scale and detail. The fact that it was constructed as a separate facade points to the importance of the Sacrament of Holy Baptism.

In my design, several elements come together to make a point; to confess what we believe. I think the initial impression would be of a rather suppressed dome. Embellishment would be restricted to Biblical quotations of Christ Jesus confronting demons, along with exorcism language taken from the Baptismal Rite.

The space is intended to be serious and sobering. To intensify this, there are visual references to catacomb niches. While there is ample room to gather and witness a baptism, there is little room to escape our own mortality. Only an oculus window breaks the gloom with an image of the Holy Spirit.

In the center of all this gloom is yet another tomb. Three steps down into a square chamber with surrounding low platforms is actually a reconstruction of the type of tomb that could have held the body of Christ. The platforms were intended for bodies, and shallow channels for the morbid use of draining body fluids while rot ensues. This, however is not a dead end – it is a portal.

Issuing from a simple Alpha-Omega cross, water traverses one of the channels and pours into a conspicuously-low, eight-sided Baptismal font. The only way one may be baptized with this design is to symbolically sit where Christ lay or to be held by someone who does the same. In a visual double entendre, a cloth for post-baptismal wiping “lays folded to one side.” This is also a perfect opportunity to allow fragrant incense and spices to waft.

Just as one must sit where Christ was laid, so also the simple act of standing, after the sacrament is administered, confesses what we believe: That He did not remain dead, but arose to life. Dead men tell no tales, but neither do they stand. In this, we thumb our noses at Satan and death, and relish it with abandon.

The Baptismal Rite thus ended, all leave behind the confines of death and hell, and enter the place where our Lord promises to meet us – the sanctuary of the church, and the Church Eternal.

Posted by The Art Curmudgeon at 5:31 AM 2 comments: 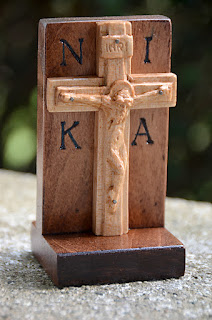 “Photoshop And That Darned Tree”

No, I didn’t photoshop either of these masterful representations of the Garden of Eden. Neither is this a post about glossing over the Fall. Or sin. There is, however, a strange connection between the software application and that darned tree.

When I was younger, I misunderstood the danger of the Tree of the knowledge of good and evil. I credit that ignorance to Satan himself, who lied to Eve in declaring that she would “be like God, knowing good and evil.” Somewhere in the stupider parts of my brain I reasoned that, once having eaten the forbidden fruit, we would know important stuff – like passwords into heaven and other classified information – which really wasn’t ours to have.

Experience this side of heaven has taught me differently. I now know stuff I’d rather not know. I’ve experienced things that didn’t exist in Eden, and it sucks so much. The Lord in His infinite wisdom tried to keep that sort of knowledge from us, but Adam and Eve did not heed His voice. And we are no better.

Strangely, this knowledge of good and evil cascades out of our sinful lives and ends up in unexpected places. I’ve heard stories from police officers, for example, who relate how little parts of them die with each horrible crime case they handle. We shall surely die, indeed.

Which brings me to an assignment I had ages ago while working as an artist in a press newsroom. Having expertise in Photoshop was one of the many skills at my disposal. Normally, the photo editing software was used to create cover art or to clean up otherwise unusable photos.

One day an assignment came from “the other side of the building,” where advertising and classified departments reigned. It was an extremely rare assignment. It was handed to me personally, and was done so somewhat clandestinely.

A photo was given to me to “fix.” It was an old photo that was to be paired with a present-day photo of a couple who were celebrating a landmark wedding anniversary. In the old photo, the husband stood behind the wife, who was holding a toddler. The child had to go.

From a technical perspective, the assignment was a nightmare come to life. Nixing the child was one thing, but reconstructing the various folds of clothing and rebuilding non-existent arms was another. After several hours, I somehow made a convincing image. But something horrible remained.

I felt as if I had been privy to tragedy; to heartbreak; to an unspoken history hidden under layers of years and silence. No one would suspect any of this by looking at the photo – not even if they searched pixel by pixel. But I became intimate with it all as the child’s face was erased and a striped blouse of 1950’s vintage was put in its place. Even in my own ignorance, I knew more than I cared to know.

And now you know.