Perhaps it’s because I recently finished a “smallish” altarpiece – a subject in itself for a future post – that I have altarpieces on my brain.

Others, however, are relatively small and unassuming. Some were never intended for a general audience, a congregation, or, for that matter, anyone outside the family. If guests dropped by, chances are the modest doors would be politely, but suddenly, closed. In the art world, these might be labelled “portable altarpieces.” Often, a better term might be “private altarpieces.”

One fine example is the Braque Triptych. The diminutive piece by Rogier van der Weyden struggles to reach 17 inches tall by 54 inches wide. When opened.

When closed, it looks like a sad epitaph to a lost life, and that is what it most probably was. The Braque Triptych was likely commissioned by the widow of Jehan Braque of Tournai, a man who died too soon after marriage. His widow, Catherine de Brabant, carried her grief long after, even after re-marrying, and that grief is obvious on the blackened, exterior doors of the altarpiece.


But then the doors open. A richness of color, modeling, and symbolism appears that is seemingly possible only from the hands of such a Northern Renaissance master.

The busts of five figures fill the interior. St. John the Baptist and Mary Magdalene each fill a door. The center panel contains a central Christ, flanked by Mary, the Mother of our Lord, and St. John the Evangelist. Interestingly, I was familiar with the figure of Mary Magdalene long before seeing the entire piece.

One unique feature of the altarpiece is the use of small text that gently flows around the heads of the figures. The Scriptural snippets relate to each figure and add an informal flavor only evident when viewed in an intimate setting.

One might argue it shameful that so much effort was wasted on such an object of exclusivity. On the other hand, it is commendable that in days past the Christian home was considered a natural extension of the Church, complete with reverence, deep heartache, and a longing for the life to come.
Posted by The Art Curmudgeon at 3:54 AM No comments:

The Font In My Garage 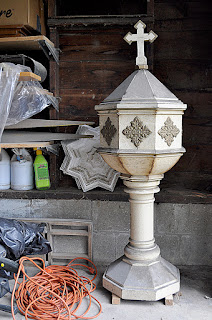 In case you haven’t yet noticed, I’m not normal. For starters, I’m an artist. I’m also a lefty. Even though I’m a guy, I can’t stand conversations that dwell on National League standings or sports scores of any kind. I’d rather go shopping. And I have a Baptismal font in my garage.

I could, at this point, tell you that I collect odd stuff; that I’m a pack rat; that I’m a hoarder, but I’m not. I will tell you that ever since I got serious about sacred art, I’ve had all manner of requests come to me without much prompting. That is how the font ended up in my garage.

The Baptismal font and its companion – an antique reredos – was lurking in the dusty basement of a parsonage. I’m pretty sure I was the second-to-last option. The last option was a landfill.

It’s a sad fact that finding church homes for old items is extremely difficult. In many cases, the pieces were replaced with newer accoutrements when the church building had a makeover. And because congregations want new furniture for new buildings, old pieces are most often ignored and put into storage until memory loses its dusty grip.

Through a not-so-normal arrangement, I am going to clean up and reframe the central painting of the reredos for the church that once held the piece. They have a much more magnificent reredos than the original, but the painting has enough historical significance that it belongs back home. In exchange, I will keep the “leftovers.”

The plan is to refurbish the font and reredos frame and, at some point, create an original piece that will hopefully do the old furniture justice. Then I will try to find a home for everything.

But there is a greater reason to stop that trip to the landfill. The Baptismal font simply won’t do for repurposing as a snazzy TV stand or a flower pot or a bird bath. Through that unassuming portal passed a host of The Lord’s own children, newly imprinted with His Name and eagerly welcomed into His Kingdom. For that simple reason, forlorn artifacts such as those populating my garage demand immense respect. The dump is not an option.
Posted by The Art Curmudgeon at 4:09 AM No comments:

A Little Christmas in the Sepulcher

I know this seems totally inappropriate, but Good Friday is a good time to reflect on Christmas. Undeniably, the prophesies of the Messiah, the life of Jesus Christ, His death and resurrection are all woven into one gorgeous tapestry. His birth in Bethlehem is part of that. Furthermore, I like to think there is a huge connection between Jesus’ birth and His death.

Holy Scripture isn’t a well-thought-out yarn with a cast of thousands; it isn’t a novel. Neither is it some how-to book on living the good life; the Bible isn’t “Sanctified Living for Dummies.” It is The Word. Because He is The Word, Holy Scripture is Christo-centric. Sorry, dear reader, but it isn’t all about you. (Actually, I'm not sorry at all.)

What this means is that everything in Scripture points in some way to the Christ. For example, if one reads the Passion of Christ as a novel, then the only thing you’ll take away from the crucifixion is that “it was a dark and stormy night.” If, however, you read it in a Christo-centric manner, then you should catch the obvious that Jesus was not just a man; that The Father was abandoning Him; that even the elements were bearing witness to this heavenly punishment.

Likewise, when the word “sign” pops up in Scripture, no one is giving traffic directions. “Sign” indicates that what is about to follow is extremely important; a “sign” points to things more profound than the obvious, no matter how strange the obvious actually is.

Jesus repeatedly told his disciples exactly what was going to happen to Him when they got to Jerusalem. Whether they were in denial, or whether sin had clouded their minds, or whether it was not yet given them to understand, we have a tendency, in 20-20 hind-sight, to do face-palms and shake our heads at their missing the obvious. Perhaps we, too, miss a much earlier clue to Jesus’ death – one that was there at Christmas.

In my pea-sized brain, I contend that a bit of crucifixion foreshadowing occurred when the angels announced the birth of Jesus Christ to the shepherds. They were given a sign. Most take the sign as an indication of Jesus humility – the born-in-a-barn thing. Others point to the Virgin birth, but the angels didn’t mention anything about a virgin to the shepherds. Look at the Nativity with a slightly antiquated understanding of shepherding and burial practices and see what otherwise isn't so obvious: A human, wrapped in burial cloths, and lying in a sarcophagus.

In an abrupt shift of artistic disciplines, I recently wrote a hymn that builds on this imagery. “What King So Gently Swaddled There” sings of the entombed King of Heaven, but instead of being wrapped in burial cloths, He is “swaddled.” Of course, this reversal is but a faint shadow of a much greater reversal in the plan of Salvation, for by Grace we put on His royal robes when He assumed our sin. Cantor Christina Roberts set my words to an original tune, which she named "Perpetua Felicity." The hymn will be sung tonight during the Good Friday Chief Service at Our Savior Lutheran Church, Grand Rapids, Mich.
Posted by The Art Curmudgeon at 3:28 AM No comments:


It will be relatively easy this Sunday to imagine the roar of the Jerusalem crowd. Our own shouts of “Hosanna” will amplify it, and those palm fronds [and perhaps a grand procession] will make the tableau nearly complete. But if you listen very carefully, you just might hear strains of rejoicing – not at the gates of Jerusalem, but from a very different place in the Kingdom.

The Palm frond has long been a symbol of victory and rejoicing. Not only was it commanded in Levitical style by The Lord for His ancient people, but it was also a common victory symbol used by other cultures, including the Greeks and Romans. Being a showy and elegant bit of botany, the palm frond looked festive when waved, and regal when cradled in an arm. Like the laurel wreath, it took on specific meaning when used in celebratory context.


For the Israelites, it was to be used to celebrate during the Feast of Booths – both in rejoicing before the Lord, and in construction of the booths themselves.

It was natural, therefore, that the citizens of Jerusalem utilized palm branches in welcoming what they thought was their “bread king” and the answer to foreign oppression. For a fleeting moment, it was a reason for celebration and rejoicing – if only for a very wrong reason. Their joy would quickly sour into calls for blood.

We should, however, be careful to not judge the Jews harshly for being fickle and ignorant. We know the Christ more intimately than they as our Savior from sin, death, and the power of the Devil, but how quickly we forget rejoicing that fact while facing the next storm or tribulation that comes down our path!

William How’s lyrics from the hymn, “For All The Saints,” remind us of a very different celebration.


“And when the fight is fierce, the warfare long,
Steals on the ear the distant triumph song...”

The Book of Revelation holds a close parallel to Jesus’ triumphal entry into Jerusalem: An innumerable group, dressed in white and carrying palm branches, shout praise to The Lord. As is traditionally depicted in art, these are the noble army of martyrs, but it is also true that those coming out of the great tribulation include us, as well.

Wearing white robes that have been washed in the blood of The Lamb underscores, in unimaginable terms, an equally-great mystery that we shall resound with a joy that is neither fickle nor misplaced, but is inexpressible and without end. There, in eternity, our “Hosannas” will be the victorious realization of our prayers here, in time.

Posted by The Art Curmudgeon at 4:51 AM No comments: