I still get a tad annoyed when confronted by it.

I know there’s a bit of psychology going on because, while I’ve never been a fan of the LC-MS logo, the thing is immediately recognizable. It seems to be on nearly every lapel pin, brochure, mailing, church sign, and traffic sign directing visitors to the church building down the street. The intent is that it be as recognizable as a box of Tide detergent. That can be annoying.


Ever since its unveiling in 1984, the LC-MS logo smacked of mass-marketing. It follows branding trends, and there are umpteen pages of requirements for its use, placement, and acceptable Pantone™ color schemes. It’s slick. And bland. The logo has intended meaning in the two directions of the cross arms, the triple crosses, and its twelve individual components. Visually, that’s stretching things – in reality, it’s a corporate logo with little confessional power.

The LC-MS logo greatly eclipsed a much older design – The official LC-MS seal, which was formerly used as a sort of identifier of the synod. Now the seal plays the part of a shy cousin that rarely comes out of its quiet confines.

Designed by the Reverend A.R. Kretzmann and drawn by Walter Geweke, both of Chicago, the official LC-MS seal emerged several decades after the synod’s founding. It was designed when folks wanted to say a lot in a small space. I might be old-school, but I appreciate the seal’s distinctiveness and confessional nature. Like many other symbols, however, it needs to be occasionally explained to retain any merit.


In the center of the seal, a tongue-like, blue shield represents the Christian's faith. A prominent gold cross on the shield proclaims that we preach Jesus Christ crucified. Rays emanating from the crooks of the cross make it a “Resurrection cross,” proclaiming that we also preach Christ risen from the dead. Nearby Latin words declare "Jesus Christus Dominus Est" (”Jesus Christ is Lord”), and three gold crosses symbolize the Holy Trinity. Three gold stars on the shield represent the Apostolic, the Nicene, and the Athanasian Creeds. Six gold stars on a white field stand for the six Lutheran Confessions contained in the 1580 book, "Concordia." Grape vines symbolize Christ's words in John 15:5, "I am the vine; you are the branches.” Dividing the white field are the three ‘solas’ on which Lutheranism is founded: Sola Scriptura, Sola Gratia, Sola Fide (Scripture alone, Grace alone, Faith alone). The exterior circle contains the proper [although grammatically incorrect] name of the church synod and the year it was founded – 1847.

Beneath the shield is Luther's Seal. That particular emblem is, of course, centuries old, and has never been eclipsed by either the synod’s logo or its official seal. It is a visual rallying point for a group of confessional Christians who were initially slandered as “Lutherans.” We still wear the name with distinction.


Posted by The Art Curmudgeon at 6:33 AM No comments:

Dumb As We Ever Were 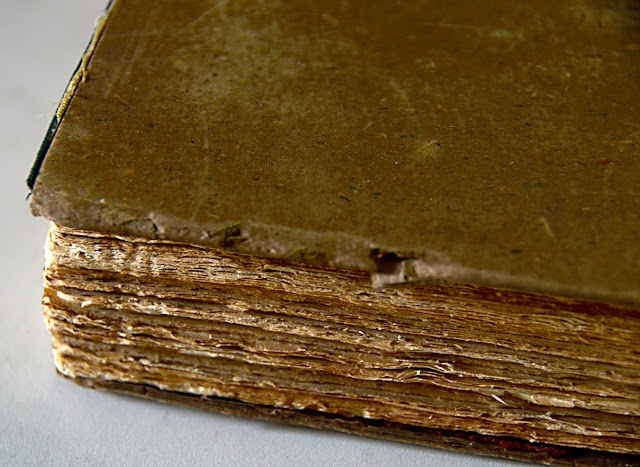 It sits there, a bit worn and spineless, but nevertheless imposing. The book has nearly given up its embossed cover to time. The words it contains, however, still bite.

I was recently given an early edition of H.J. Smith’s “Illustrated Symbols and Emblems of the Jewish, Early Christian, Latin and Modern Churches.” The book’s odd binding and a few cryptic stamps attest to it being a very special book. It has wonderful illustrations by the author, some of which are decidedly original and others that would be familiar to most.

What is also familiar is the thrust of the book’s preface. In talking of art schools in the U.S., Smith notes that “...while these schools are thus elevating the art standard of our country, the subject of Symbolism seems to have been overlooked, and the graduates are left to learn or to guess at the meaning of the symbols that are used so lavishly in our churches.”

That was the year 1900, and it seems we are just as dumb. In fact, several books on the subject bear the same sentiment. I suppose that these books’ very existence is due to our relapsing ignorance of even the simplest of Christian symbols – the very same symbols that were easily recognized by our Christian forefathers.

While sacred imagery – and its inherent symbolism – is not necessary in the Church, we are certainly poorer without it. It does, however, take constant teaching to elevate those symbols from mere decoration to confessional and – dare I say – divine art. To the casual viewer, a bird and its young nest there, some geometric shapes are tangled there, and a few seemingly-random letters are sprinkled beyond that. But even to the youngest, knowing saint in the pew, that same bird – a pelican – reflects the loving, sacrificial act of our Savior. That tangle of geometric shapes confess the indivisible nature of the Holy Trinity. Those random letters might be abbreviations for the name of Jesus or “Christ,” or they might declare “Jesus of Nazareth, King of the Jews.”

Yes, it takes work to keep ignorance at bay, and I am no exception. While realizing that there are countless, wonderfully-confessional symbols of which I am probably unaware, I also know that the time is coming when yet another book on the subject will be written, again, out of necessity.


Posted by The Art Curmudgeon at 3:40 AM No comments:

Although it’s been years since I worked in the editorial department of a newspaper, I still occasionally get the urge to graphically explain something or tinker with data. Yes, I can be a geek.

This geek doesn’t get out much, and I have a hunch some readers don’t, either. I thought it might be interesting to see how some famous altarpieces stack up against each other – this, without obtaining a visa or boarding a plane.

Not all altarpieces are large affairs. One of my personal faves, the Mérode Altarpiece – also known as “The Annunciation Triptych,” is just a tiny thing. It was probably made for domestic use as a private altar. There is an abundance of such pieces, especially within the early Church, which points to piety emanating from the church and entering the home.

The Isenheim Altarpiece is larger, but is still not huge. It was intended for a small chapel of an institution that cared for patients suffering from rather unpleasant skin diseases.

The Ghent Altarpiece, featured in the film, “The Monuments Men,” is only slightly taller, although it is packed with ridiculously-gorgeous detail. This detail makes it seem much larger when viewed out of context.

Cranach’s Wittenberg Altarpiece should be quite familiar to Lutherans. It contains confessional imagery that includes many movers and shakers from the Reformation, and individual panels from it have been reproduced as prints.

A quick hop, skip, and a jump to Austria will allow a view of what may arguably be the tallest Gothic altarpiece. Rising 44 feet above the altar, the Kefermarkt Altarpiece is filled with sculpted figures and delicate wooden tracery.

The largest Gothic altarpiece in the world is claimed by St. Mary’s Basilica of Kraków, Poland. The Veit Stoss Altarpiece is massive – taking 12 years to create. Each 12 foot-high figure it contains was sculpted from an individual linden log. While it is considered a Polish national treasure, the altarpiece bears the name of its German sculptor.

The altarpiece shared the same fate as the Ghent Altarpiece, being plundered by German occupying forces. Its disassembled components were hidden in the basement of the Nuremberg castle, where they survived heavy bombing during the war. After the war, it went through extensive restoration before finally being returned to its home in 1957.

Posted by The Art Curmudgeon at 4:03 AM No comments:


The royal banners forward go;
Where He, by whom our flesh was made,
Our ransom in His flesh has paid...
The cross shows forth redemption's flow,

Even as a child, I remember banners carrying more weight than they do today. At the annual Reformation Day service held at Immanuel Lutheran Church – the "Mother church" of LC-MS churches in Grand Rapids, Michigan – banners processed behind the crucifix. Each of the many banners represented an area church and, like the churches, every banner was distinctive.

That was then. Today, most banners are designed as wall dressing. Some occasionally change with the Church seasons. Few are designed to actually be carried, and wall hooks – not processional staffs – are the rule. Because the banners were not designed to withstand the rigors of carrying their own weight in wind and other unruly elements, they usually bear one other quality. They are cheaply made.

Felt is the rule. Glue replaces stitching, and it shows.

Now before you get your breeches in a wad, please know that I have – and still do – design banners destined to be executed in felt. There is nothing so very wrong with felt – that is, unless there are better alternatives.

We are the product of ages preceding us and, unfortunately, that means that much of what exists in churches today has origins in the 1960's. Banners reflect this perhaps more than any other item in the church. With inexpensive felt available in umpteen bright colors, sold in almost every craft and sewing store, and easily worked with nary a stitch, it has been the go-to when a banner is requested.

Centuries before the 1960's, however, fabrics of better lineage were employed. That was because banners were used to display confessions of the Church (in case one didn't get a hint from the processional Crucifix). As such, they were to be a more permanent fixture and, as the centuries-old hymn above declares, they underscored the Kingly nature of our Lord and pointed to His preeminence among heavenly royalty. Felt and burlap have a hard time doing that.

In a return to former days, the studios of Ecclesiastical Sewing are starting to create banners truly worthy of Christ's radiant Bride. Yes, brocade is used. Felt is not. These banners take seriously the encouragement of Luther, who urged that we put the best construction on everything. Yes, even banners.