“Beauty and Catechesis:” A Review 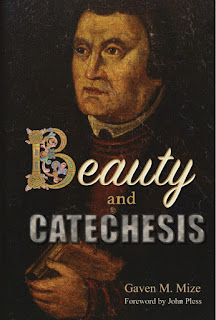 The Rev. Gaven M. Mize is about to show us what Rembrandt has to do with the First Commandment.

In a throwback to the days when our visual appetites were sated alongside our need to read, “Beauty and Catechesis” comes as a refreshing addition to the bookshelf. And what could be a better pairing than Luther’s Small Catechism and works of art by the masters?

Rembrandt’s “Daniel and Cyrus Before the Idol Bel” compliments Luther’s explanation of the First Commandment and the author’s expounding on the same. Works by Rubens, Ingres, Masaccio, Bosch, El Greco, da Vinci, and a host of others are also featured, spanning stylistic periods, artistic media, and individual notoriety. But “Beauty and Catechesis” isn’t just another pretty book.

Mize deftly weaves the Catechism into devotion into art lesson. Without explaining beauty or beating to death a philosophical definition of the same that is bound to get ugly, he simply shows beauty through wonderful examples of master works and through the greater beauty of Holy Scripture.

For visual learners, this little book will help instill the words of Luther’s Small Catechism, and breathe meaning into both Luther’s explanations and the featured artwork. “Beauty and Catechesis” is not a book to be memorized, but a book to which the reader will want to return and explore.
Posted by The Art Curmudgeon at 3:25 AM No comments:

Once Upon a Cross

If you’ve seen one crucifix, you haven’t seen them all.

One can pretty much guarantee that none of the original disciples saw anything like the gold-plated cross you may be wearing around your neck. To them it would be extremely strange and downright insensitive. The cross did not come into popularity as a Christian symbol until 100 years or so had passed after Jesus Christ’s resurrection. Before then it was an ugly reminder of Roman rule and a reminder of an even uglier death. Add another 200 years or so until the crucifix sporadically appeared with its corpus, or body, of Jesus.

It wasn’t until the Renaissance that the crucifix took on a life of its own. Variations appeared. Paintings of the crucifixion influenced sculpted crucifixes so that two general forms appeared – the “Cristo vivo” and the “Cristo morto.” The former showed Christ in agony with His head lifted and slightly to the right, as if imploring His Father. Some have suggested that this pose signifies Jesus accepting His Father’s Will, but Scripture pretty much shows that He accepted His Father’s Will in the Garden of Gethsemane
.
The problem with the Cristo vivo pose is that it isn’t very confessional. Unless there is a tri-radiant nimbus behind the figure’s head, it could be any hapless victim of a Roman execution.

The Cristo morto crucifix is the more prevalent pose, showing a dead Christ. This variation has what its counterpart does not – the wound in the side of Jesus. Not only does it set the figure aside from other criminals in that the proof of death follows Scripture, but the issuance of blood and water – usually evident even in sculptures – also confesses Christ’s role in Holy Baptism and The Lord’s Supper.

But there is another crucifix variation – the “Christus Rex.” This version always symbolically replaces the crown of thorns with a regal crown, displaying Jesus as Christ the King. This does not, however, nod to Pilate’s inscription on the tabula and announce Jesus as mere King of the Jews, but instead proclaims Jesus as King of All.

Within the Christus Rex form are subtle variations. Most describe Jesus as wearing kingly robes, and some, indeed, show just that, but a far greater majority have Christ wearing a chasuble. This major detail might otherwise be construed as kingly apparel if it weren’t for the ends of a pastoral stole peeking from underneath.

There is also variation in the position of the arms. Many use the “Touch-down Jesus” pose, with His arms strangely spread upward. Perhaps we are to assume we are to jump into the Savior‘s open arms. At any rate, the depiction definitely shows a resurrected Christ.

While recently delivering a chancel piece to Trinity Lutheran Church, Cincinnati, I was privileged to closely view the old Christus Rex crucifix of the church. The beautiful piece was carved in Germany, and its confessional symbolism is razor sharp.


In this particular example, Jesus’ arms are not in the touch-down pose, but are straight out and nailed to the cross. So are His feet. He wears a stylized chasuble that could be mistaken for a kingly gown, but underneath the fringes of a stole are evident. And there is one additional touch – He is wearing a maniple on His arm
.
The maniple, while certainly common in the Roman Catholic tradition, is also still used by some in the Lutheran Church during the Lord's Supper. One might argue that it is too Roman, until recalling Luther’s immense anger when Karlstadt once preached in his street clothes. The fuming Martin Luther immediately went to his own church, donned every appropriate vestment for the Eucharist – including maniple – and proceeded to demonstrate that the Body and Blood of Christ demands utmost respect and reverence.

That little detail of the maniple adds much to the symbolism of this Christus Rex crucifix. The sculpture can visually be read thus: Our living King, once crucified for our sins, comes to us here, in this place, in Divine Service to us in the Lord's Supper, blessing us with His very Body and Blood.

–
Posted by The Art Curmudgeon at 3:42 AM No comments:

Playing Second Fiddle in the Sanctuary

There are occasions when a piece of art isn’t the point.

It may seem strange that weeks and months of work would intentionally garner something akin to a second- or third-place finish. In a world filled with divas and limelight and egos the size of small dirigibles, creating a piece that diverts attention is distinctly peculiar.

Diverted attention is usually not a goal in the sanctuary, either, but strong focal points can get out of hand. Bernini loosed his artistic cannons on St. Peter’s Basilica and peppered its interior with masterpiece after masterpiece. His design for the Baldachin – a covering for the high altar – is epically breathtaking. But behind it is his Cathedra Petri, a gluttonous, visual feast of gilt bronze, marble, stucco, and stained glass. Each successive piece demands attention – so much so that the eye goes everywhere. And nowhere.

There is such a thing as restraint. (Well, okay, perhaps “restraint” was omitted from the Baroque dictionary.) Applying restraint sometimes proves the greater task than pulling out all the stops and trampling subtlety.

This weekend, a piece is being installed in Trinity Lutheran Church, Cincinnati. Its placement in the chancel will be hard to miss, but it will in no way be the focus. The piece is comprised of two panels with three angels each, and containing the words, “Holy, Holy, Holy Lord God Almighty. Heaven and earth are full of Your Glory.” The angels bow in adoration – to an existing reredos containing a figure of the victorious, reigning King of Glory.

The adoring angels act as a set of parentheses highlighting the Lord of Sabaoth, the altar upon which He promises to come, and the true focus of those who partake of Christ’s body and blood. A piece which thus re-directs attention to the Savior is worth endeavoring to create, and any honor in creating the same is rightly laid at the feet of the Lord.
Posted by The Art Curmudgeon at 3:41 AM No comments:

Nothing man creates is worthy of worship, and a processional crucifix is really only bits of mundane wood, metal, and paint. A processional crucifix, however, rightly demands greater respect than a bride walking down the church aisle. When either is revealed at the doors, the congregation stands as one in each instance and faces the rear. No one, however, bows to a bride, no matter how beautiful she is. There are decidedly few smiles when a crucifix processes. There is infinitely more reverence.

Early processional crucifixes were sometimes altar crucifixes fitted with removable staffs for processing. Staffs did not enter the Orthodox tradition, and processional crucifixes remained a smaller affair for them. The Western Church, traveling a different course, embraced the idea of a crucifix held aloft. Simply put, the device is visible in a crowd, and seeing a crucifix move above heads of worshippers announces that something important is about to begin.

In the early Church, pews and chairs were absent in sanctuaries. Everyone stood. Typically, worshippers arrived early to sing hymns. In a packed house, it would be a bit hard to know when it was time to stop singing – that is, until the image of Christ crucified parted the worshipping throng and processed toward the chancel.

The crucifix may be simple materials wrought by human hands, but we revere the greater Truth contained in its symbolism when it enters the sanctuary. What follows is an explanation of a crucifix recently commissioned by Christ Lutheran Church, Platte Woods, Missouri...


The poplar outer cross is a subtle variation of the cross-crosslet – an old symbol in which the four arms of the cross are themselves crossed. It represents the four Gospels and the spread of the Gospel to the four corners of the earth. In this example, the Gospels are further represented by depictions of the writers in four roundels. In their role as Gospel writers, these saints are sometimes shown with pen in hand, but nearly always with a scroll indicating Holy Scripture. There is not much in tradition concerning the writer’s appearance, with the exception of St. John, who is usually shown as a young man without a beard
.
The bird’s eye maple cross on which the Corpus is nailed contains three visual devices – a tabula, a tri-radiant nimbus, and a skull. The tabula is inscribed with a traditional “INRI.” It is shorthand for “IESVS NAZARENVS REX IVDAEORVM,” or “Jesus of Nazareth, King of the Jews.” Of course, two other languages were also represented, but they are ignored altogether in this greatly-abbreviated form.

Placing a skull at the base of the cross is also traditional. It gives a nod to the place name where Christ was crucified and underscores the horror of His death. Furthermore, it points to Christ’s victory over death.

The basswood Corpus bears not only the wounds of nails and crown of thorns, but also the gaping wound in His side. It’s issue of blood and water point us to the sacraments of Holy Baptism and The Lord’s Supper, and remind us that life and salvation are found in Christ alone.
Posted by The Art Curmudgeon at 4:48 AM 1 comment: