Observations From The Courtroom 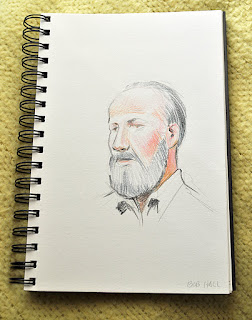 I ran across the remnants of a small sketchbook the other day, and it was a vivid reminder of a few weeks from a life I once lived.

In my 30-plus years as a Press artist, my typical workload involved illustrating stories, producing charts and maps, and designing pages. Occasionally, I was called on to visit the scene of a fire, reconstruct a traffic accident, or create a building cutaway from blueprints. And then there was my brief stint as a courtroom artist. It was an education.

Artists were not necessary in the courtroom. Photographers were given clearance in every courtroom – that is, until a man dealt death on Federal land in northern Michigan. The rare capital case – in a state with no death penalty – became sensational, and the Federal judge said “No,” to cameras in the courtroom.

I had never before entered a courtroom – much less a Federal version that was packed with reporters, law enforcement officials, citizens associated in some way with the crime, and curious onlookers. “Stuff like this,” I told myself, “only happens in movies.”

At the beginning of my first day in court, I found a seat near the back of the gallery. The next day the presiding judge kindly offered better seats to the three attending artists, in order that we could spread out our abbreviated collection of art supplies and have unobstructed views. I now had a front row seat to some of the most broken lives I’ve ever encountered, and it was up to me to convey my view of it all to readers.

Surreal is a good word. I got used to taking off my shoes and belt upon entering the building; emptying my pockets; putting my paper and pencils on the conveyor belt so they could be x-rayed. I got used to hearing law enforcement folks talk shop while in the public restroom. I got used to Federal marshals talking about their kids, and the prosecutors joking after a lunch break.

But it was not my job to feel empathy. My job was to capture faces, do so quickly, and have something to publish at the end of the day. Unlike photographers who can get a shot of a witness immediately after they give a juicy tale, I had to assume everyone would say the most damning words, and therefore set to work as soon as they sat in the witness stand. Hence, the sketchbook full of faces, most of which would never make any edition.

I’m sure there are plenty of artists out there that would jump at the opportunity I was given. I know I did. But I doubt I would again venture into the same arena to see evidence of a broken world and destroyed lives and the kind of hurt that refuses to be comforted. Imagination is enough.
Posted by The Art Curmudgeon at 9:51 AM