We sometimes treat our pastors shamefully.

When we’re not thinking about the quality of Bible class coffee, we often grouse about the length of sermons, the shortfall of funds, the height of the pulpit, the depth of the Baptismal font, and the breadth of the pastor’s chasuble. We complain that cousin Citronella can’t commune with the rest of the family at Easter; we complain that the organist can’t play “Here comes the Bride” at our kid’s wedding; we complain that we’re singing that unbearably-long Luther hymn. Again. And we complain that we have to crack open a Bible during Bible study. 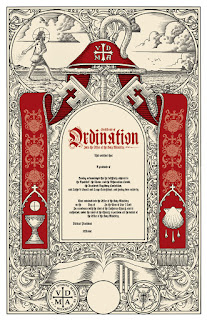 These may seem exaggerations, but there are untold stories regarding wayward sheep. Many are real head-scratchers. For the most part, pastors have that blessed ability to absorb such nonsense – stupidity and all – as if their main job description was playing the role of sanctuary piñata. They aren’t any such thing.

On the other hand, when the chips are down, when death pays a visit, when sin overwhelms us, they are the first to show up – not to give what the old Adam wants, but to give us the Scripture we truly need.

The Office of the Holy Ministry is a gargantuan blessing to us poor, miserable sinners. When given an opportunity to do it right by our pastors, we should splurge. That is why I’m releasing a newly-designed Ordination certificate and it’s close cousin, an Ordination Anniversary certificate.

While I took cues from some of Cranach’s book title pages, the entire design is original and is meant to edify. On the certificate, a pastoral stole displays symbols of the sacraments of Holy Baptism and the Lord’s Supper, along with a traditional nape cross, emblazoned in this case with the VDMA abbreviation which means “The Word of the Lord Endures Forever.” The stole is draped over a Shepherd’s cross composed of intersecting rod and staff – symbolizing the blessings of pastoral correction and guidance. Crossed keys symbolize the Office of the Keys, which is entrusted to called and ordained Ministers. A vignette of Christ in the role of the Sower adorns upper portions of the document. Luther’s Seal, the VDMA cross, and a space for a church seal run along the bottom. The whole background of stylized floral embellishment is actually a single, rich growth that originates from Holy Scripture, which, in turn, is underscored with three bookmarks as being Divinely inspired. 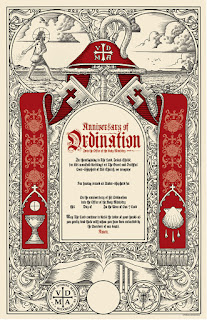 Some may argue that the certificate is too ornate or opulent. Others may argue that it looks too “catholic.” I will take both charges as high compliments. It is, however, a relatively simple gesture in honoring the Office of the Holy Ministry. For too long the Church has languished in 1960’s ugliness, and not even certificates escaped unscathed. Mod-squad motifs of sweeping lines and spare detail now only smack of embarrassing cuffed, bell-bottoms, polyester disco shirts, and ill-conceived perms for men. If we are to celebrate the Church as the Bride of Christ, then it’s time we put aside notions of showing up at the wedding wearing a marmish, plaid housecoat, and underscore instead the beauty and opulence and richness of all that the Lord sees through eyes of Redeeming Love.
________________________________

Both Ordination certificates are being offered as 11" x 17" giclée prints for $75 each, which includes digital text insertion for those not keen on hand-lettering the documents. To order or for more information, please e-mail me at edriojasartist@gmail.com
Posted by The Art Curmudgeon at 3:33 AM