Getting Cute For Once

I do not live a cloistered life. While I now work almost exclusively on projects within the Church, not everything I’ve created is intended for the sacred realm. For decades I worked as an illustrator/graphics guy in the newspaper industry, and drew inspiration from all sorts of artists and genres. I still draw inspiration from unlikely places and people, including Miss Mason.

Today I thought I would showcase a set of giclée prints that would not exist if it weren’t for the work of Miss Mason, along with my own simple desire to create something impossibly cute. I’ve always thought that one or two of these – or the entire set – would be adorable on the wall of a child’s room or nursery. [hint. hint.] 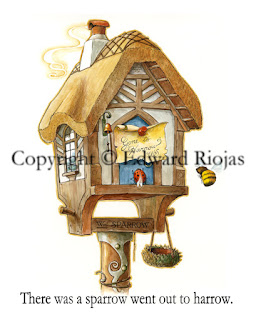 Miss Mason (Marianne Harriet Mason)  lived in Victorian England. Coming from a family of means and being thoroughly modern, she was able to dabble in a variety of interests, including botany illustration and specimen collecting. She worked as a civil servant, inspecting the placement of foster children. She was also the first woman to collect the lyrics and music of local folk songs.

In 1877 Miss Mason published “Nursery Rhymes and Country Songs,” in part as an homage to recollections of her own childhood nurses, and also to sidestep the not-so-refined term “folk song.” The last song in the collection was a very old song, probably of Northumbrian origin, entitled, “There Was A Pig Went Out To Dig.”

It is a curious thing that this little ditty, while stringing together agricultural practices and animal species, is essentially a Christmas song. To more noble ears, the folk song is simply nonsense, but like many other mummer tunes it speaks to the long-held importance of Holy Days, if in mention only.

While the song had rather humble origins, the tune was later elevated to an embellished score by composer Percy Grainger. Like many of folk-based tunes of the period, “There Was A Pig” bears musical similarities to another tune, in this case, “I Saw Three Ships.”

Because I created these images as book illustrations, there are both vertical images intended for single pages, and horizontal counterparts originally created as two-page spreads. Sizes and prices for prints in the set, along with a large variety of other giclée prints, both sacred and secular, can be found on my website, edriojasartist.com

Posted by The Art Curmudgeon at 3:34 AM