“My Own Good Works”

My own good works all came to naught,
No grace or merit gaining;
Free will against God's judgment fought,
Dead to all good remaining.
My fears increased till sheer despair
Left only death to be my share;
The pangs of hell I suffered. 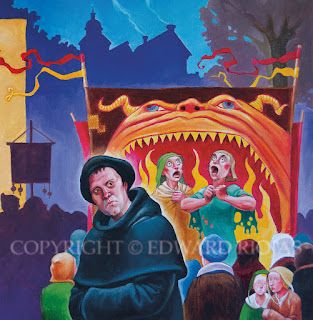 Martin Luther continues his dark train of thought in this stanza of “Dear Christians, One And All Rejoice,” pointing to the Reformer’s state of despair. The book of the same name was produced by Kloria Publishing.

In the illustration for this stanza, Luther walks past a morality play in progress. Such productions were often a strange conglomeration of drama, dark humor, and questionable theology. They typically included unsuspecting actors being swallowed by the ugly maw of hell, as is shown here. The threat of damnation must have been a constant companion for those who depended on their own good works for salvation. In Luther’s case, it was an unbearable weight. To highlight his emotional and spiritual state even more, I’ve included a couple of blissfully-ignorant children, whose relative innocence has not yet been polluted by the teachings of Rome.

Even the invented, misplaced hopes so deftly promoted by Rome did little to ease troubled minds. In a silhouette behind Luther, a banner bearing official Papal seals urges the faithful to buy indulgences.

Luther could not escape these ever-present reminders of his own insufficiency. Thanks be to God, neither could he escape the Hound of Heaven, Who pursued the Reformer with the Light of the Gospel and eventually led him to discover the Grace of a loving Savior.

Again, I don’t plan to offer giclée prints of this particular image unless someone twists my arm.

Posted by The Art Curmudgeon at 3:32 AM